I did approach this one with caution - 170km and 2 Cat 1 hills - and my reconnoitre on Saturday had not put my mind to rest: the 10km Cat 1 Passo Praderadego had shown long stretches of 10 to 15%


Would I be able to make it up this monster? And then the next Cat 1? 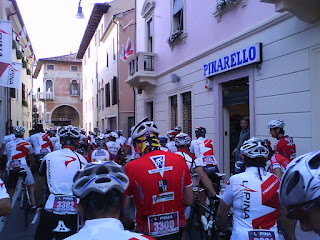 Sunday started very relaxed and not cold. Easy cycle down to the start where everything was different from last year. I ended up crammed down a side road - actually right outside the back of the Pinarello shop - well out of it. Luckily things got underway pretty soon - we turned into the main drag and saw thousands of bobbing cycle helmets stretching away into the distance - and proceeded to hop and scooter our way down to the start. Once over the line and over the timing mat we picked up speed and blasted out of Treviso in one big pack using the full width of the road. 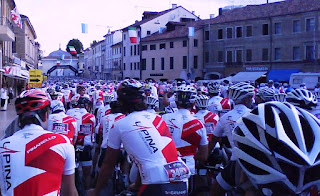 First hour or so was in this enormous group - and this led directly to the first problem of the day - too many people on the first climb. Everything slowed down, we all got off and walked. I think somebody shouted "Mario" to a friend ahead but this call was then picked up by others and repeated as we went up together - "Mario! Mario! MARIO!". And then "Ave! Ave! Ah-veee!" like we were in some kind of religious slow penance trudge up to a monastery. All fun.


Halfway up, for no reason, everyone got back on and cycled the remaining bit.


This hill had stretched us out a bit more. And the next one followed soon - the cemetery climb. This led to a circuit of a hill top castle and then a fast descent. More rolling countryside and another hill stretched us out more, and then we came to the first food stop, which was busy.


I did notice how many took the short course...


Things were definitely a lot quieter after the turn, but an English voice behind me made me slow down and connect with a young man from Sky Velo - over on a club trip with their connection to Pinarello (suppliers to the Sky team).


Soon we were on the first Cat 1 – Passo Praderadego – which started fine in a little village but then just went on and on.  Probably none of it that steep but relentless – and then it started to rain, and rain – then lightning and thunder, heavy rain bouncing off the road.


10km of it.  A few stops to re-gather, before continuing the slow ascent.


This topped out through the trees in almost night time visibility to be greeted by an empty food station – just a table in the rain.  And all the other cyclists crouched in a nearby barn.  I just got in as the hail like bits of shrapnel bulleted down.


A long, wet ride through a valley – basically along a flat A road – in a reasonable group, and then a quick climb before the next challenge – Monte Tomba.


By now I had teamed up with another Sky Velo rider and we started up – but he soon left me as I was in trouble – just not much strength in the legs and this climb was relentlessly steep.  It took me ages. 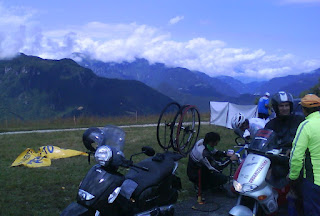 Food at the top amongst the peaks and then fell off this one in sunshine and top speed – on my way home.  That’s when the first puncture happened – I was halfway through mending it when one of the wonderful mechanics on scooters stopped and finished off for me.


So off again and now absolutely alone.  Up the final climb which was really hard simply because I had no climbing muscles left, then food and a quick phone call to say I was on my way.


Despite all these punctures I had been going along on the flat really well and was absolutely fine to continue – even if it meant I wouldn’t get a time.


As I approached Treviso I was in traffic and could see I was very late.  Into the final straight and I had to dodge around the Garmin inflatable which had just been deflated, and crossed the line to all sorts of half-joking celebrations – which was fine by me. 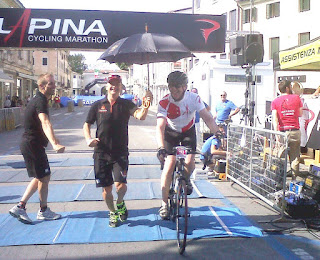 I was the last one home before the cutoff.  In future I should make sure I know the cutoff – never paid attention to this before and just by chance did I make it.  Probably would have over-cooked it if I had known!


Definitely beer and pasta after that – and no trouble with a queue!