Land of Hops and Glory sportive

Just back from a great little sportive in Herefordshire (and Worcestershire) - 94km through the rolling countryside of orchards and hop fields with a few proper hills thrown in along the way.  And organised by the Wye Valley Brewery so refreshments on tap...

Parking was super-easy for the relaxed start at the brewery, and sign-on similarly quick - the rider numbers could be used at the end of the ride to get a free drink.  About 100 signed on and gathered outside for a mass briefing and then send off in groups of 20.

﻿
We were introduced to the rolling ups and downs of the route immediately with a chilly descent and then a short hill - the sort that has a crawler-lane for trucks.  We were heading towards Hereford and passing clumps of people from the sportive.

﻿
Turning left way before the city we headed due south on fairly quiet roads with gentle rises and falls, and at Fownhope we turned left again.  By now some groups were forming and I managed to tag onto the back of local club Gannet CC (for a short while) who are sponsored by the brewery and help out on the day.  ﻿﻿
﻿ 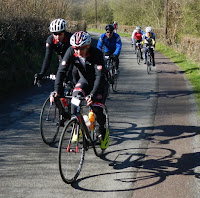 Past Woolhope the route went upwards, gently, for the Cockshut climb, more of a long rise leading to an extended pootle including a small hill at Camp coppice.
﻿

Pretty soon the Malvern hills came into view.  You know the route goes over them so you start looking for the lowest bit.  Eventually we get into Colwell and start a very long "pre-hill" rise which, if taken too fast, could really become a problem because at the end the slope of the hill heads properly upwards.  This bit is rightly called "Zig-Zags" on Strava and it does have that continental hairpin flavour.  All quite steep - may be 15% in the corners?  And eventually leads to the Wyche Cutting with great views over the Worcester plain.﻿

There's a drop off this down into Malvern and an abrupt right turn off the drop which wasn't great - I saw it too late and had to choose between signalling to the car up my chuff, or applying the brakes.

﻿Further drops down ramp-roads led to the one minor problem - a sign had gone missing and mass-panic seemed to be in play.  Good old Garmin plus spotting additional signs (put there by the organisers to anticipate this situation) got a dozen of us back on track and whizzing though Malvern suburbs.  We almost missed the short turn off for the food stop - being a brewery  ride it was at a pub - The Morgan.
﻿
A table of snacks and drinks plus bananas and Haribos seemed to please all.  I grabbed a Snickers and set off through more quick roads in the town.  Pretty soon there was just 20km to go but the "Land of Hops and Glory" has a sting in the tail.  Things got properly lumpy after Leigh Sinton with rolling rises and great descents on clean, wide roads.  There was a sustained climb around Acton coppice.  All this up and down really starts to drain the legs.

﻿﻿
﻿
Bromyard is nearly at the end but involves a long climb up the "by-pass" - this emptied my tanks.  I was set to finish on emergency back-up power when I noticed I had a chance of getting under 4 hours for the ride - if only I could do the last 4km in 7 minutes or so.  Not sure what average that is but it was enough to mean I couldn't just trundle in.  More rises and falls to the finish line got me back with a couple of minutes to spare, not bad when I'd stopped 4 times to Instagram pics along the way.

Race number was immediately converted into a beer and then there was a big spread to get stuck into.  I was under the impression that I was just behind the first finishers - Gannet CC & co.


Last word has to go on the goodie bag.  Normally these aren't worth picking up in the UK, in my experience.  So I grabbed the brown paper bag on my way out and didn't look inside until much later.  Wow, I knew it contained a beer but then all this other stuff - calendars, beer mats and a bar towel, even a pen came out - I can set up my own personal Wye Valley bar now. 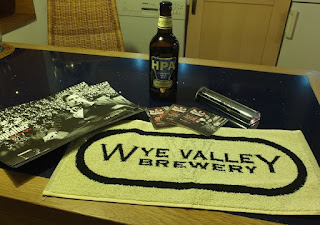 Best Bits:
Overall - An early season try-out sportive to get you back in the saddle 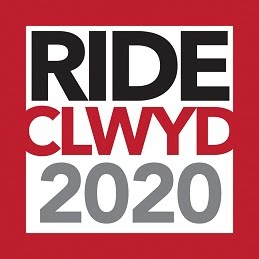