For the first time in 17 editions we are going South in '22.

Some really quiet lanes and easy rises will take the 100milers way down into Herefordshire with a first food stop coming at mile27.5 - this one is a little off route so easy to miss...

After this things get a little more undulating right down to Hay-on-Wye and then in Clyro there's the first significant challenge - 2 related climbs up and past Paincastle:

After this you're up on the remote, scenic moors of mid-Wales for 18miles of virtually car-free riding.  There'll be an outdoor food stop around the 50mile mark up on the moors - we have to do an outdoor one because its so remote.

A brief drop to the A44 and then back into the wilderness heading towards Abbey-cwn-Hir (which should be familiar to regular Epicers) - food stop 3 at the Phillips Hall.

After the food stop the 100ers will ride the reverse of the original Epic route - up to Bwlch-y-Sarnau and then a long descent through David's Well - yet more remote, scenic landscapes typical of the Epic (another 15miles of wilderness riding).

Short ride up the A483 and then an easy climb back onto the moors:

Again, regular Epicers may start to recognize the roads up here - they are from the start of the original Epic.  You'll descend the climb on the old course and return to Knighton along the Teme valley.

For the 2022 edition of Ride Clwyd I want to go North to explore routes all the way to the coast and then West into the remote parts of North-Central Wales. Very different from 2021.

The second 25mile was going to be completely unfamiliar:

South out of Dyserth there are good roads rising up to give great views to the West.  There's a flat ride across the top part of the Vale of Clwyd and then it gets back to climbing after Henllan.  A long ascent with chunks of 10%+ got me over to Plasisaf - Strava link (2.7miles long, 1,000ft gained).

The roads were in excellent condition, many sections of new, super-smooth tarmac well up to Formula 1 standards.

It was after Llansanan that things got properly serious - the climbing went up to 18% very quickly and stayed that way for a good while - Strava link (2.3miles, 700ft gained).

More lumps and bumps after that before eventually emerging onto the remote, windswept moors. Here you really are alone in a massive landscape.

This could be a challenging area in poor weather conditions... Easy riding and very little traffic took me over the Aled Isaf reservoir and then onto the bigger Lyn Aled.

For the event we are likely to have a food stop somewhere on the moors so at least there'll be a friendly spot for participants to call in on.

Next post - more remote riding before a return to civilization...

New route already sketched out, but every mile needs to be ridden to make sure it works.  Yesterday (Thurs 21st Oct 2021) I went out riding the first 25miles.

First 7 miles are the same as the 2018 and 19 editions of Ride Clwyd.  Then things change - going straight on at Northop and after a mile taking a left into Middle Mill Rd and starting a long but fairly gentle climb - this is Middle climb on Strava and popular with local riders - nearly 3miles long and 500ft gained by the top.

This climb starts out on beautiful, wide tarmac and never really deteriorates all the way up.  It's also very quiet - I didn't see a car throughout the whole climb.

It brings you out on top - the Halkyn area of high moors, quarries and ex-mines.  Great views over towards Liverpool, very exposed but on more wide/clean roads with the occasional smooth cattle grid (plus a few massive quarry lorries but they won't be running on the Sunday of the event).

All of this bit of the route has been suggested by Ride Clwyd regular Tim Wilkes - he's the one who rides the event with a fire fighters breathing apparatus on his back - raising money for charity.

After sliding right past Babel the route drops on a clear, long descent, passes over the A55 and on to Whitford.  There a left turn went into the first dirty lane of the route - probably seasonal and leading up to a farm.  More good lanes around to picturesque/well-heeled Llanasa with views of the sea ahead and rolling countryside to the left.

Pretty soon getting views of Pestatyn whilst descending towards Dyserth.

Then disaster - the little lane (Pandy Lane) I'd picked for entering Dyserth was a muddy, leaf/twig strewn downhill slalom not helped by being popular with local dog walkers.  Very quiet (no motorist would want to drive it) and leading to a short, stiff climb into the village that finishes ejecting you onto the main road.  Sometimes what looks good on Ride with GPS just isn't so...

So now I was into re-planning the route.  Exploring another option which turned out to be impossible (a narrow, steep un-sighted descent on gravel) and then finding a much better option - wide, smooth, though 16% downwards and with a mild hairpin that will need judgement.  It leads to an unfortunate short busy main road ride and another stiff climb into the village. 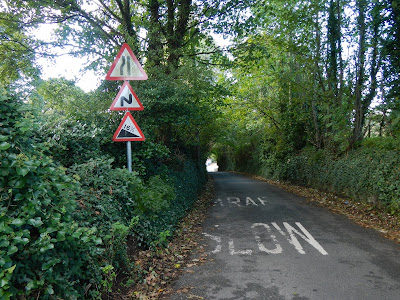 Dyserth is at the 25mile mark so is the ideal point for the first food stop.  Unfortunately none of the potential venues in the village are available, and combined with the route difficulties may well lead to a complete re-think of the this bit of the ride - anyone fancy going all the way to the seaside at Prestatyn?

I'll hit Ride with GPS soon to see what can be done - on the plus side would mean we could include the notorious "The Wall" climb after Prestatyn - 16% - suggested by Simon Pike via Facebook.

Anyone know any suitable venues in Prestatyn? 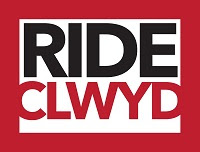 One of the highest passes in Europe the Stelvio also has these remarkable spagetti-like roads leading up to it from both sides.  I rod... 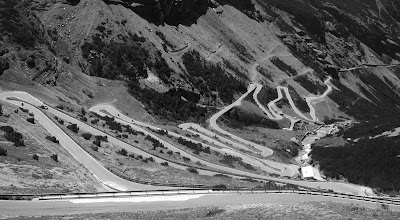